“But if the vision was true and mighty, as I know, it is true and mighty yet; for such things are of the spirit, and it is in the darkness of their eyes that men get lost.”—Black Elk Speaks, as told by John G. Neihardt

How did I put it last post? “Wherever you are be there and nowhere else?” That’s Zen. Being where you are wholeheartedly, whole-mindedly while simultaneously non-mindedly. How’s that for a tongue twisting mind-bender?

Being in the moment, very Zen as I said.

But there’s another sort of moment. Not the individual moment—your’s and mine, but the collective moment. The NOW of all of us who share our culture or civilization. Few, very few, truly have grasped that moment, that NOW.

And that, to me, is why the great early twentieth-century spiritual document Black Elk Speaks matters today.

For, growing up in the eighteen sixties, Black Elk experienced the final cataclysmic decades of a plains culture that had thrived for thousands of years in balance and harmony with its surroundings. And what’s more, as a young man his visions foretold the impending change and how his people need adapt and shift their entire spiritual nexus away from the rapidly disappearing buffalo towards a new way, a new connection with the inner and outer world.

Sadly, and it makes of Black Elk Speaks a great cry of lament and regret, he realized too late the meaning of his visions and the shamanic role he had to play if his people were to regain balance and discover a new center around which to orient their collective lives. 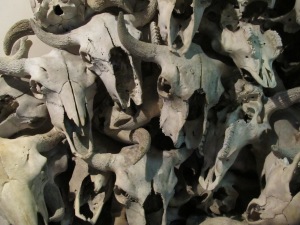 Listen to his sorrow:

“This, then, is not the tale of a great hunter or of a great warrior, or of a great traveller, although I have made much meat and fought for my people both as boy and man, and have gone far and seen strange lands and men. So also have many others done, and better than I. These things I shall remember by the way, and often they may seem to be the very tale itself, as when I was living them in happiness and sorrow. But now that I can see it all as from a lonely hilltop, I know it was the story of a mighty vision given to a man too weak to use it; of a holy tree that should have flourished in a people’s heart with flowers and singing birds, and now is withered; and of a people’s dream that died in bloody snow.“— Black Elk Speaks, as told by John G. Neihardt, italics mine

The Holy Tree, the crux—the hub, around which the Life of a community revolves, and the shaman as its keeper.

Communities evolve, they change inwardly and they alter their surroundings as well, building towns and eventually cities. Change and growth is slow but constant. And they can lose their balance along the way, lean away from a precarious and ever shifting centre.

Forces arise which resist change. Imagine how the buffalo hunting specialists would have fought Black Elk to retain their privileged status even in the face of the buffalo’s disappearance, and imagine how the warriors would have called out for war against the encroachment of the numerically and what’s more technologically superior Europeans. It was a war they had no hope of winning.

Black Elk fought, and only realized later that was not the war he was called to fight. His people are still paying the price today.

But the alternatives are always worse.

8 thoughts on “Why Black Elk Matters”