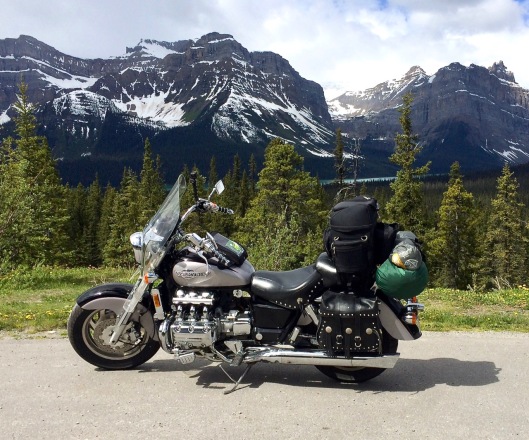 When was the last post? A full month ago?

Who has the time these days? And I say that with more than a grain of envy.

That being said, I did just managed to get out another YouTube video, first in three odd months.

That’s what it takes, it seems.

There’s work. And Sonny Boy playing soccer upwards of five times a week. Then there’s the damn garden in front of the house, the scrounging of rocks, planting of perennials, spreading of expensive rainbow coloured gravel. And don’t forget the watering.

But ok, it hasn’t all been work. I did get away on the bike for a night’s camping in Jasper.

Rode the Parkway both ways. Spectacular whatever direction you chose to travel.

The above photo was taken in the Hector Lake pullout.

Was going to write something about going to the mountains as Lao Tzu did some twenty-five hundred years ago.

“The way that can be spoken of

Is not the constant way;

The name that can be named

Is not the constant name.”

Ah, but silence and maybe the constant drone of the engine are sufficient for whatever it is I want to say.

That and the wind off the mountain peaks rushing through the trees.