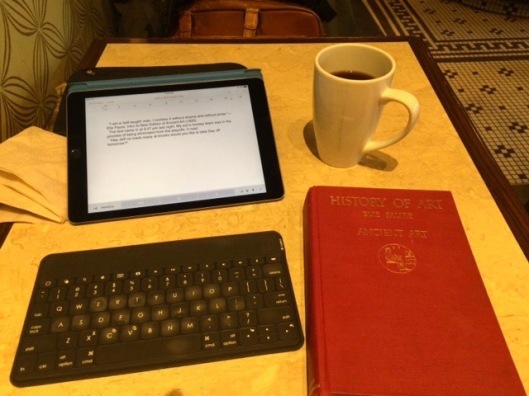 ‘I am a “self-taught” man. I confess it without shame and without pride.’—Elie Faure, Intro to the new edition of volume one of the History of Art, Ancient Art (1920)

The text came in at 9:27 pm last night. My son’s hockey team was in the process of being eliminated from the playoffs. It read:

“Hey Jeff no loads ready at brooks would you like to take Day off tomorrow?”

“YES!” I texted back, and here I am this chilly March morning.

The Purple Perk, a favourite coffee shop of mine, with a scattering of clientele and music playing slightly louder than I might wish. Jesus, I kid you not, the song playing over the speakers is ‘All By Myself!’ It’s the kind of place with posters and bills for mindfulness and meditation seminars and yoga retreats both hot and cold tacked to a bulletin board next to the washrooms.

‘I am a “self-taught” man’ confessed Elie Faure.

I had to head this post with that quote because it resonates deeply within me.

It’s a Goddamned difficult road, let me tell you.

But joyous all the same.

I know because I’ve been on it for thirty years now. And it led me directly to the Omphalos Cafe I might add.

“And he whom we call artist is the one among living beings who, in the presence of universal life, maintains the state of love in his heart.”

“He suffers; his tyrannical disquietude often makes those around him suffer. But around him, and fifty centuries after him, he consoles millions of men.”—Elie Faure, Intro to Ancient Art

In the thirty years that I’ve been carrying around Elie Faure’s works I’ve met precisely one other person who claimed to have read him. We were sitting next to each other in a Montreal bar late one night. He asked me what I was reading and when I showed him he looked at me as if I were cracked. He said he had read all four volumes of the series in one sitting over a period of nearly a week with the help of pharmaceuticals.

His wife was Russian. He had met her while teaching English in a Moscow school. Life for him had been pretty good back then I gather.

Later, when I met his wife, she looked harried and unhappy. She was very pretty and much younger than he and they had a rambunctious four year old boy.

Near the end of our acquaintance he asked me, since he was on in his years, would I look after his wife and son after he was gone.

It was a terribly lonely time but still I told him: sorry man, that just isn’t me.

“I am quite willing to mention even the movement called ‘artistic’, which floats on the surface of history by means of institutes, schools, and official doctrines, like a rouge badly applied to a woman’s face.”—Elie Faure, Intro to Ancient Art