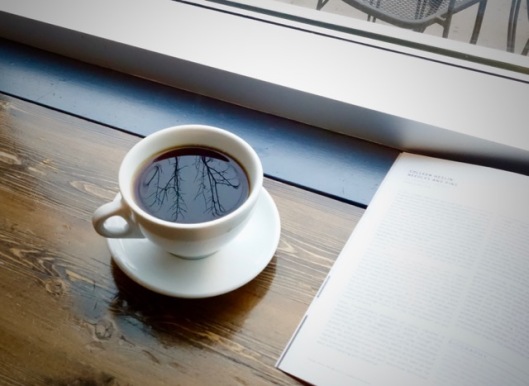 Reflecting on the decreasing frequency of posts here at the Cafe in spite of an increase in the amount of writing I’ve been doing of late, I’ve decided to launch a new blog, which isn’t quite up and running at present. Below will be my inaugural post.

This blog is nothing really more than an offshoot of my other blog, The Omphalos Cafe, found at omphaloscafe.com. More and more as time passes, it seems, I’ve been having difficulty reconciling the two worlds I live in, one, as documented in the Cafe, arcane, rich but remote in a way, and the other, outside, in this world we inhabit and scrape against day after day.

The original intention was that in retreating to the Omphalos Cafe one underwent something of a transformation, granted one that in all likelihood would take years and years, and having done so then began looking upon the exterior world we live in in a different, utterly unique and perhaps even  an enlightened way.

Large words, but strange as it might seem, I am totally convinced the likes of James Joyce, Joseph Campbell, Henry Miller and countless others, many of whom’s work I’d gathered on the shelves around me would intuitively grasp exactly what I’ve been up to.

However, the Cafe can be an extremely rarified place, magical yes, but altogether too removed from our common modern day experience for a connection to easily form. Who has time to sit down and do the work required to attain to any sort of ‘enlightenment’ these days, any sort of alternate view? Few, and judging by the accelerating pace of our techno-connected world, fewer as time wears on.

The Omphalos Cafe remains what it is: by its very nature not something that appeals to a multitude. In fact, I’ve long held the suspicion that the message at its core might only sing for a very very select few. Everyone, for instance, can pick up a copy of say the I Ching, but who is there to plumb its extreme depths? Not all of us stand, on a physical level, seven feet three inches tall; neither do we on what might be called a metaphysical or spiritual one.

This then, is a departure. A stepping out into the world as it is, seeming warts and all. But, having spent so much of my life in the Cafe, I cannot help but look out upon said world through different eyes, which may or may not shine forth as the posts accumulate.

Anyway, the sun is shining through the window next to me as I write these words, obscuring my view of the screen. I see no better excuse to put an end to this little introduction and head out into its warmth.

1 thought on “Stepping Out…”