That’s my distant relative, the one in the middle

No, I’m not talking about my own personal sacred grove here at the Cafe, though for me that’s precisely what this place is.

I mean, no church has ever done it for me, no preacher ever encompassed as much as my soul cries out for. There always seems to be a limitedness about them, an adhering to a party line, regardless how open and non-denominational they claim to be. Christians remain more or less undeviatingly Christian, Muslims too, Jews, Sikhs, Hindus, Buddhists, you name it, there’s always boundaries beyond which we best not venture. Even the Universalists, whatever you want to call them, they may aspire to embrace all beliefs, creeds, avenues so to speak, but rarely if ever succeed in tapping the root source of it all.

And my sacred grove need be educational too, encompassing not only a spiritual reality but a rational, educated one to boot. What point universalism if it doesn’t truly jive with the modern world? We live in the here and now, not centuries or millennia ago.

Anyway, enough of that, let’s go back a millennia or two to a pair of Sacred Groves, one from eighteen hundred years ago and one from seven or eight hundred, in order to illustrate what has gone wrong with the historic narrative we’ve been force fed for far too long. 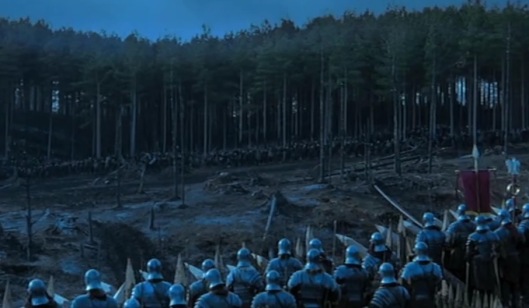 Above is an image of fierce Germanic hoards from the film Gladiator. Our misguided sympathies lie with Maximus and his Roman legions, far from home and fighting for ‘freedom’ and ‘democracy’, ideals rapidly waning in the Empire of his time. (Oh the irony!)

As I’ve written, historians would have us believe in and cherish our Greco-Roman ancestry; in reality those unruly, messy, untameably unkempt barbarians are our forebears.

Case in point: where would they worship but in the forest, the Sacred Grove? Odin hung on the sacred tree Yggdrasil in order gain wisdom. Search up Odin on Wikipedia and one is shifted from the Roman over to the Germanic side of the equation.

Nowadays imagining their sacred forest place is left to our fancy, but if those tribesmen were to build it in stone, a capability they would not gain for eight hundred years, what would it look like?

A Sacred Grove borrowed from the net….

But they did, and the Sacred Groves they built stand today unmatched—if misunderstood—monuments of a foregone era: Chartres, Notre Dame, Metz, Reims and hundreds more. Education tells us the Gothic cathedrals have this and that influence, Romanesque, Byzantine, even Mohammedan, and that is where we have gone wrong. That is book learning, the passing on of fact without poetic insight. It’s academia and not Living Truth.

Why bother with all this? Because the misunderstanding at the core of this argument colours everything we see and feel today. The Germanic peoples that overran Europe to end the Roman Empire took the Greco-Roman heritage forced down their throats on the point of battle axes and swords, namely the Roman Catholic Church, and in spite of rigid church doctrine made something of their own of it, namely Gothic Sacred Groves.

Similarly, all Western art through the ages, thought, word and deed is coloured by this schism, the conflict between outer creed and belief and inner reality and urge to expression.

For fifteen hundred years the two have rarely coincided, become one.

One day they will once more….

In a Sacred Grove.