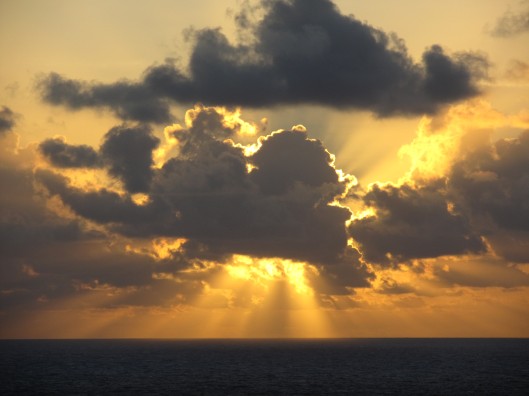 See where the light is coming from?

“Though he is hidden in all things,

That self does not shine forth.

Yet he is seen by subtle seers

As I was saying last post, we Westerners have had a thousand years of this “look at me and what I can do” thing. And as I said, it’s slowly, ever so slowly, coming to an end.

The ‘he’ referred to in the above quote is where we aim when doing yoga. It is the ‘zone’ athletes refer to when they are on top of their game. It is that golden, unthinking place of innocence children inhabit when immersed in play.

The ‘he’ referred to in the above quote is the final destination of all religions, which are ever merely the pathway there and not the destination itself.

And it is a terrifying place for those clinging desperately to the egos they’ve unwittingly fashioned for themselves in the course of ‘growing up’ today.

The lust for ego-individuation that characterizes our modern Western Liberal educational system has gradually taking us deeper and deeper into a harshly lit phosphorescent dead end labyrinth of thought, out of which we struggle with yoga, meditation, self-help books, and free form self-exploring blog sites.

Looking forward, the guidance we seek will not come from over inflated egos proclaiming their take on the truth. They won’t announce: “Look at me! Read my book and make me a millionaire, a billionaire.”

No, they will quietly, smilingly intone: “Do not lose yourself looking at me, for this is not my Truth. It belongs to Life, and Life is inherent in each one of us: me, you, and every other being, whether human, animal, plant or what have you throughout the universe.”

“Yet he is seen by subtle seers

That’s the kind of vision and understanding worth far more than a mere million or billion dollars.

Because Life is ALL there is….

1 thought on “Yet He Is Seen By Subtle Seers”