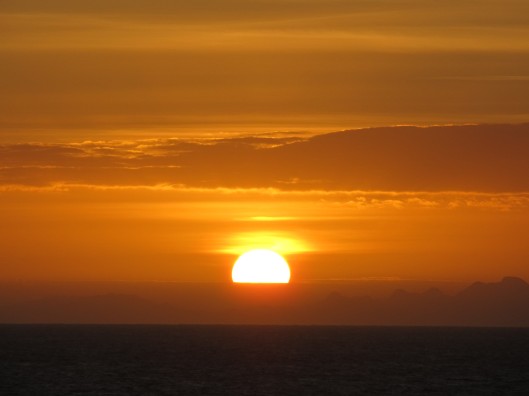 A New Day, Sunrise Over Cuba

“All participate in the ceremonial according to rank and function. The whole society becomes visible to itself as an imperishable living unit. Generations of individuals pass, like anonymous cells from a living body; but the sustaining, timeless form remains.”— Joseph Campbell, The Hero With A Thousand Faces

Back from the Carnival Dream with a quote. A little ritualistic mumbo-jumbo exorcizing the events of the last week. That’s harsh, but not entirely inaccurate.

I was asking the bartender where he was from and how long he had been on the ship. He replied Mumbai India, and five months. The bar was in the casino—where I didn’t drop a penny the entire week—but there was a lone guitarist doing golden oldies nearby and my legs were tired from walking the promenade deck. 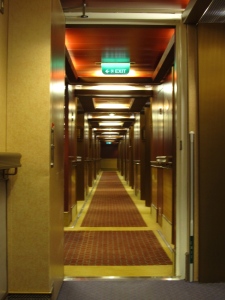 The golden oldies were everywhere, from the lone guitarist doing Hotel California and James Taylor to the electronically aided duo who frequently played the main lobby, to the cheesy piano bar, the funky Motown lounge and the larger, glitzier dance club. Everywhere classics from decades ago.

Carnival works very hard to create memories…or recreate them if the need be. Before and after our nightly dinner in the Crimson Dining Room we had to pass a battery of photographers posing people against romantically picturesque backdrops. Drawn in one night, we posed as a family and a couple. In spite of the man’s best efforts tilting our heads this way and that I couldn’t muster the necessary ardor. We took a pass on the photos. 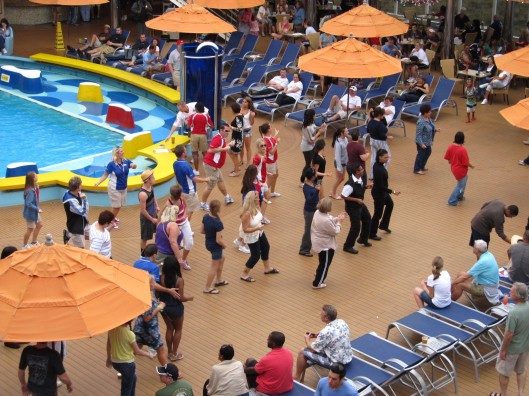 That's me, behind the camera

There were moments though, as I suppose there always is. Early morning, before the ship stirred, with the moon and the stars overhead and the gentle waves slapping and exploding with a shower of spray and foam off the bow bordered on the sublime. Early mornings, with the sky in the east growing pale, like a bad hangover—though unfittingly in this case—before gradually catching fire, and the quiet dignified grace of the crew going about their duties were serenely peaceful moments worthy of the Cafe. 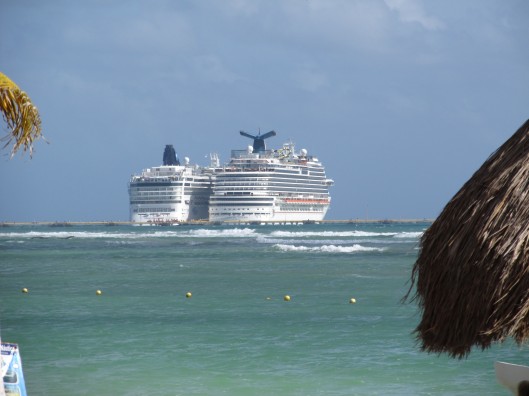 The Carnival Dream, on right, from shore

The crew, catering to our every whim and need, hailed from such places as Estonia, Bosnia, The Ukraine, The Philippines, Indonesia, India; the officer class were largely Italian; the entertainers alone were first-worlders, as of course us lucky passengers.

“The whole society becomes visible to itself as an imperishable living unit.” Writes ole’ Joey Campbell. Indelibly beautiful. Like a sunrise in the Caribbean. Potently magical. 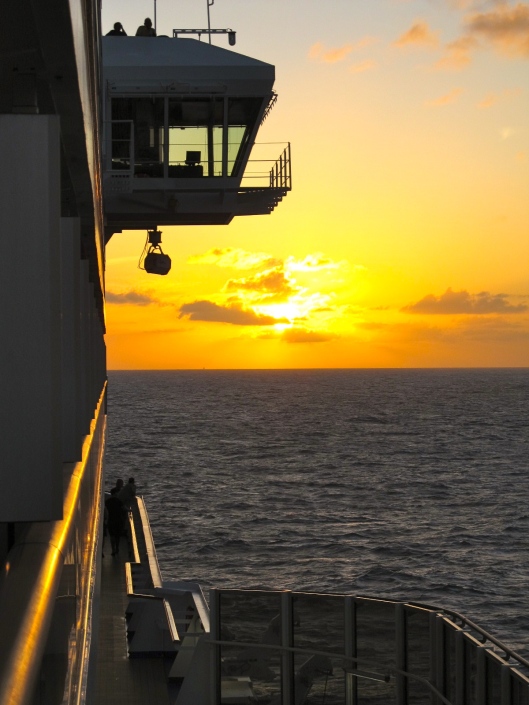 But I’m back from holidays, there’s snow on the ground I had to shovel before sitting down with this coffee.

And work to be done.

2 thoughts on “The Journey”