The Wall Street Protests are nearing the one month mark and showing no sign of abating. In fact, the movement calling to account the gross excesses of the financial community, the egregious bonus structure awarding millions upon millions to a very few in face of the heartless plundering and gutting of the masses, the inordinate power and influence wielded by a relatively small but highly privileged sector of the economy is gaining momentum and spreading…even to my minor backwater neck of the global woods.

Not far from my house a modest sized tent-village has sprung up in anticipation of Saturday’s scheduled march on our local outposts of the distant bastions of power. Although the protesters hardly stand a chance of conveying any sort of reasonable message, Calgary being what it is, the city has made tremendous and to many unbelievable strides forward in the last decade or so. Rather than earning a stout bean-buffeting, Mayor Nenshi and city hall have even blessed their makeshift village with several  Porto-Potties. 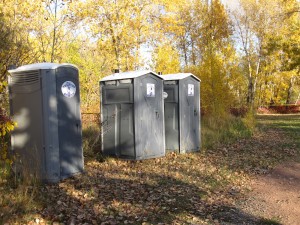 How civilized. It’s the least this open-minded city can do for individuals who choose to exercise their right of free speech and even dissent by marching on Bankers Hall in solidarity with those occupying Wall Street.

I get all misty-eyed thinking about the humanity if it… until it occurs to me that the protesters are marching in the wrong direction, and the powers that be are probably happy enough to send street cleaners and gardeners ahead of them to beautify the route.

Now if, say, the protesters packed up their tiny island village retreat Saturday morning and parked themselves in front of Suncor or Syncrude, Husky Oil or Exxon Mobil’s Canadian branch plant Imperial Oil, or let’s say CNRL, Nexen, or TransCanada Pipelines–applicant for the contentious Keystone Pipeline, it’s hard to imagine the city, the province, or indeed the Petroleum Conservative led Federal government responding to them in such a lovey-dovey manner.

Gross exaggeration? Look who accompanied Mr. Baird, our loud mouthed minister of something-or-other to Libya on his fact finding and humanitarian mission: representatives from an oil company, a pipeline company, and a construction company.

Here in Alberta we are sitting on an estimated 173 billion barrels of oil. And that’s no typo: 173 BILLION! At a modest $80 a barrel, that’s a colossal $10 plus TRILLION worth.

Each and every day we ship over two million barrels of crude south of the border, by 2015 or 2020 that number is forecasted to climb over five million… a day! My son is in grade two at our nearby school. Thirty kids crowd into his little classroom and if we parents want computers in the classroom with those kids and decent books in the school library we have to sign up for the casino at the end of the month to pay for them.

That’s not what we do here at the Omphalos Cafe. The problems we face are not systemic ills and definitely not worth debating and protesting over.

No, not systemic, they are–and I’ve actually coined a word for want of anything better–soulstemic.

They are of the nature of communal life. Inherent.

I flick over and check the definition of ‘systemic’. It reads: ‘of or relating to a system…’

Well, here I define ‘soulstemic’ as ‘of or relating to a group of beings having soul.’

Ooh boy, I think I’ve struck a rich vein in this soulstemic thing. But that will have to wait for another post. My wife and son are out of town tonight, and I have things to do.

Because Life is ALL there is….