After dinner yesterday I slipped quietly out the back door and rather than stop by the local pub for an end-of-the-day bracer I decided on a tea at the Omphalos Cafe. These days I don’t get by as much as I did some years ago–family and all, you understand. Maybe that’s a good thing, given the state of mind the Cafe inevitably elicits.

Xenon of course was there, quietly reading in the back room. We chatted a little. He asked me how this blog was going. I said pretty much as expected. Blogging is definitely not his thing. Nor mine, perhaps. But there’s something at the heart of the Omphalos Cafe I feel obliged to… at least make the effort to nail down. 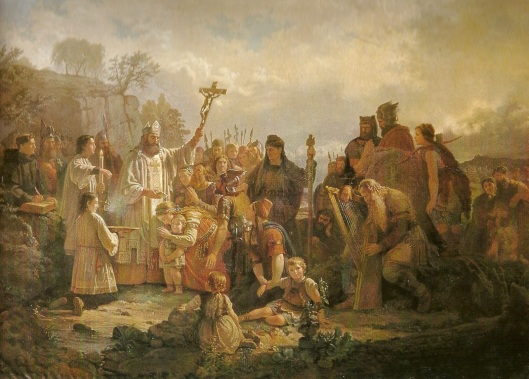 So I’m sitting there glancing distractedly through a few volumes and pondering idly the two prints Xenon has hung between the crowded shelves of books.

The first, St. Sigfrid Converting The Heathen, painted by a fella named Blackstadius back in 1866, I wrote about in another post titled ‘We Are The Seekers’. “Damn,” I’m thinking after rereading that Seekers post, “did I do that? Put it on the curriculum!”

Of course there’s St. Sigfrid, clad in the full majesty and regalia of the official and everlasting Church and holding his cross of the crucified Jesus aloft. In him I see all the popes and his representatives throughout the ages right up to today.

However, my loyalties lie with the seemingly–but only apparently–defeated Germanic western European folk in shadows on the right hand side. As I wrote in the Seekers, those scowling warriors, priests and bards, men, women and children are us! A thousand years ago that is, –and the time factor matters.

Those warrior chieftains? I am reminded of that recent silly Hollywood comic book Thor.  They are the descendants of those barbaric hordes in the opening scenes of Ridley Scott’s Gladiator. Russell Crow and the corrupt degenerating Romans won that skirmish, but the tribes will be back in ever greater numbers. Rome will recruit them to man the barricades, they will eventually make and unmake emperors, before smashing what was left of the western Roman world to pieces. 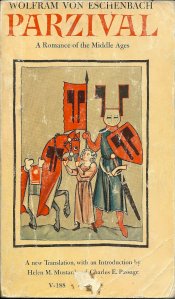 The Story of Our Knight

Those angry warriors are the Angles, the Saxon, the Frank, Dane and Norse and every other tribe that poured over western Europe from 500 to 1000 A.D. They mount their horses and become the knights of medieval times. They are Charlemagne, the Henries, the Louise, the Frances and Charles. Do you see Henry the VIII’s battles with the pope in the painting?

They haul their war horses across oceans in rickety wooden wonders and topple other empires for the greater glory of themselves and their Church. It is a storied history lasting close to fifteen hundred years.

However… what has become of them?

And that brings me to the other print hanging in Xenon’s private little precinct, his Bible Room as he sometimes calls it.

This is Picasso’s Guernica, painted in response to the horrors of the Fascist bombing of the Basque town of Guernica back in 1937. In it there is evident chaos and suffering, but no bombers. What the hell is Picasso doing?

Ah! This is beautiful. What became of those scowling warriors and Western European conquerors of the world? There he is, unhorsed and front and centre in Guernica!

The fifteen hundred year odyssey of those Germanic warriors ends here, with the fallen knight! The early twentieth century is filled with these guys. From Evelyn Waugh’s Brideshead Revisited to Proust’s Baron de Charlus, from Thomas Mann’s plague ridden aesthete poet Ashenbach (coincidence with Parzival poet?) in Death In Venice to D.H. Lawrence’s Lady Chatterley’s Lover, Virginia Woolf’s To The Lighthouse… and James Joyce’s fallen but ever rising hero Finnegan, Humphrey Chimpden Earwhicker (or Here Comes Everybody). They all mark the end of an age.

And finally we come to my last association, for this post at least. With every death there is a corresponding birth. Dying Rome gave birth to Christianity. Looking at Picasso’s Guernica again, can that be a Mary with crucified Jesus on the left, beneath the watchful eye of the Bull?

Alas, I’ll have more to say in the future. This post has run its course. How many generations separate us from those brooding warriors in Blackstadius’ painting, 40? How many from the barbaric hordes Russell Crow fought off, 70? A long career indeed, ended of late.

Who or what was it that finished them off?

Maybe that’s what the Wall Street protesters are really protesting.