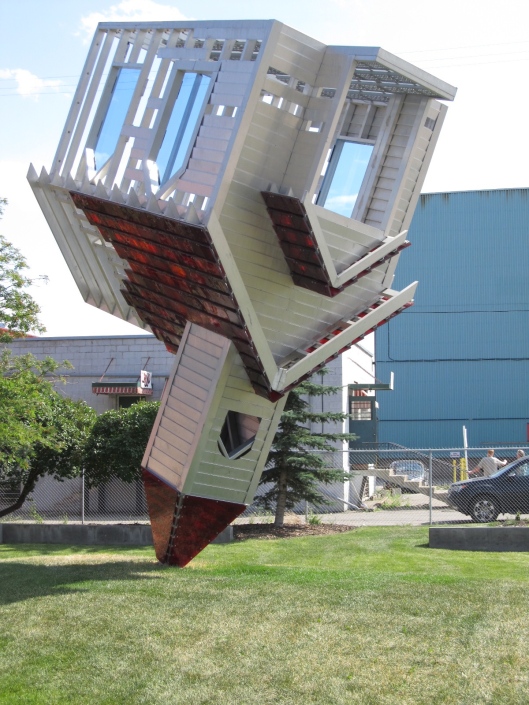 Device To Root Out Evil, 1997, by Dennis Oppenheim. Calgary, Alberta.

It was the middle of summer and we were celebrating our Grand Festival of Life. Everyone from the town and everyone from the countryside had gathered in the Central Green.

There were gaily colored tents erected, great gardens planted just for this splendorous occasion, many-hued flags flapping in the warm breeze, and all manner of party game and festival fun. Music and drumming could be heard from every direction and the people milled about, bartered and exchanged goods, laughed, and ate and drank their fill through the long sunny summer’s afternoon.

The culmination of this most magically special day of the year was the Grand Parade. The entire community participated and it was the absolute apex, the quintessence, the quiddity of our spiritual and communal life together as a group.

There it was! The first rank solemnly entered the Ceremonial Green, followed immediately by another, and then another. The onlooking crowds boisterously cheered the ingenious array of costumes. A few wore their everyday clothes, but others were dressed in various animals of the forest and field, plus birds and fish. There were also costumes of trees, flowers, shrubs and even grasses. Insects and smaller organisms were represented as well.

The ribbons were the the Great Passing Through of Life, and the humans and the trees, and every other living being, formed long snaking generational columns.

The vast crowds taking in the Grand Parade were mostly men, although there were women here and there amongst them. It was understood, as it had always been understood, that the Parade was for the men. Women somehow instinctively comprehended the True Meaning of the ribbon, but men required teaching, needed orientation. The community sought to instruct them, so that their lives could be channeled towards serving what the ribbons represented.

Now the celebratory dance was in full swing. Older couples danced and remembered when the fires of desire ran hot, younger couples held one another passionately close, while the young eyed each other with mounting mystery and longing.

All of a sudden there was a fearful screaming out of the sky, as if the world was being torn in two. Terrified people ran in every direction. A flaming ball trailing a billowing black plume fell out of the heavens.

There was a thunderous crash and the earth shook and a huge cloud of dust and smoke rose and blotted out the sun.

When the cloud dispersed, an alien rocket ship could be seen impaled in the center of the park.

Out of the broken hull climbed a man. He was dressed in white and he carried a large book.

‘My friends,’ he declaimed, ‘I am here to spread the Word of God as contained in this ancient volume to you, who surely must yearn and crave for its life giving message, seeing the darkness and obvious sinfulness of your ways.’

‘If you would have everlasting life,’ he went on, ‘follow me and follow the ways of this book… this Book…. this BOOK…’

‘Aaaahhh!’ I yelled, and awoke covered in sweat, my heart pounding.

‘That’s good…’ and she was asleep again.